I've had the new Samurai Blade in my hands for less than a day. This is a quick overview of this new product, which operates as a fantastic viewing monitor and also as a ProRes or DNxHD recorder. This bumps up the quality of your camera to broadcast standard at the same time giving you an accurate display for colour rendition. This is a very desirable product.

I’ve been looking forward to getting my hands on the Samurai Blade, by Atomos, since I saw this at NAB in April.
The screen – its all about the screen! That’s what stayed in my mind after seeing and holding the Blade in April – the crispness, sharpness, beautiful colour rendition – compared to the fold-out LCD panels attached to the cameras I shoot with, the screen on the Blade impressed me greatly.

The screen on the Blade is 5 inches in size, runs at a native resolution of 1280 × 720, and also works as a touchscreen.

Beyond the screen the ability to switch on a waveform monitor/vectorscope and other functions such as peaking, zebras, blue only, false colour, these are also provided. I want the waveform monitor vectorscope like you wouldn’t believe.

Seeing a working unit at NAB created a hunger in me which has now been fulfilled now that the Blade is in my hands.

The screen is no disappointment. It is perhaps the brightest screen I have had to work with, and this is particularly good for shooting in most conditions. You’re certainly not going to stand in the desert sun and marvel at your images, however, most of the time you can see your images extremely well, and when using indoors, in the shade or at night you have a spectacular view of your images. For shooting in sunlight outside, Atomos have a sunshade (optional) which will significantly make shooting in bright conditions, well and truly viewable. 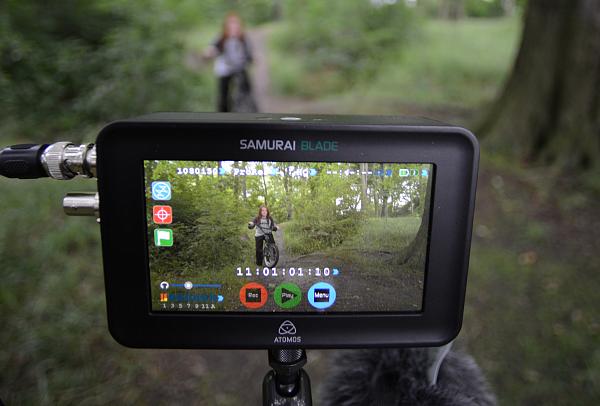 The waveform monitor/vectorscope with parade and other functions is fantastic. Simply switch it on and choose full-screen, bottom right as an overlay, or show the scopes as a horizontal strip down the bottom of screen.

Fullscreen viewing of the scopes is great though I couldn’t work out a way to view these as transparent over the images being filmed; bottom right does give you transparent video through the scopes which are then quite small to view; as a strip along the bottom is another transparent option though really, for me, I love viewing the Waveform monitor large! I can then use the sidescreen on-camera for viewing, or, switch back and forth on the Blade between full-screen image and Waveform monitor.

Nothing like an accurate screen and accurate scopes for accurately capturing images on location. 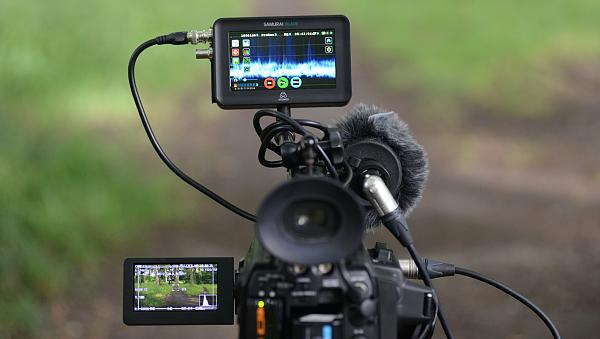 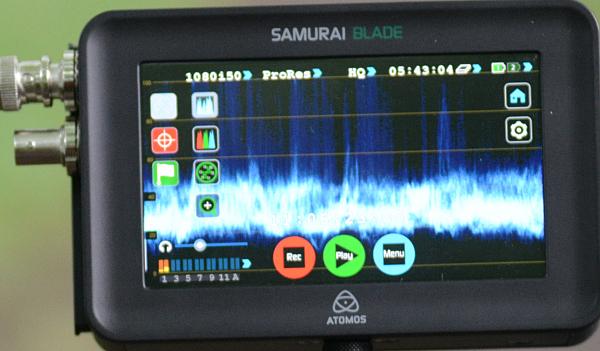 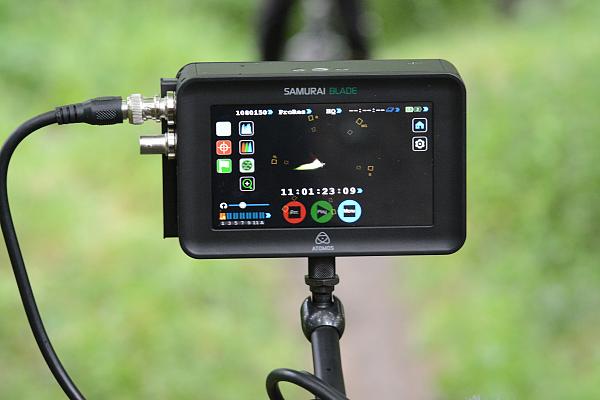 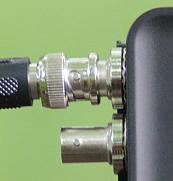 The BNC connectors are full-size, industry standard. This is an improvement on the connectors on the Samurai, which used mini-BNC. The same essential function works using either connector, though full-size BNC is more robust and is found everywhere through the broadcast world. You don’t need to remember to bring a set of mini-BNCs with the Blade. This device is built to connect to anything in a post production or broadcast environment.
The unit feels light and solid. It gives you the power to record 10-bit ProRes HQ , standard or light, Avid DNxHD; the recorder will trigger over SDI from camera giving you seamless start/stop recording; you can also dual record in-camera and on the Samurai Blade simultaneously; you can use 2.5 inch spinning discs or SSDs; the screen is fantastic (did I mention that already…)

Beyond the many features already discussed, the Blade is a great unit for reviewing and pre-editing your footage. Other models by Atomos, the Samurai, and Ninja 2, also feature this ability. However, the wonderful screen on the Blade changes the experience in a major way. You can quickly review footage, marking clips as Favorites or Rejects; you can also mark “in” and “out” points for each of the clips you select – this information can then be exported as an XML file readable by Apple’s Final Cut Pro X.

For those who work with Final Cut Pro X this is a big deal. However, for me, the big deal, is that the wonderful quality of the screen on the new Samurai Blade is so great to work with, it makes you want to use the Blade for the purpose of reviewing and pre-editing.

If you already have a Samurai you have a great recording and playback device, however, with the Samurai Blade you have so much more… 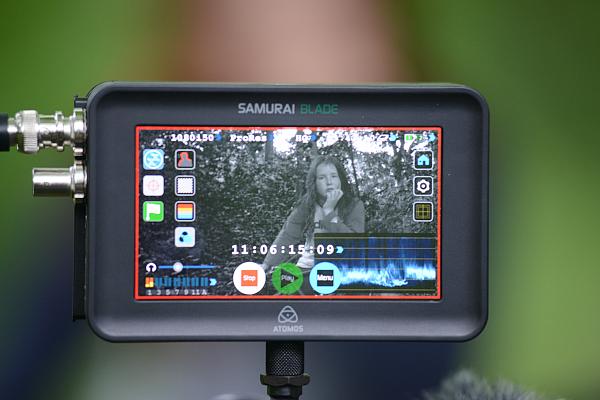 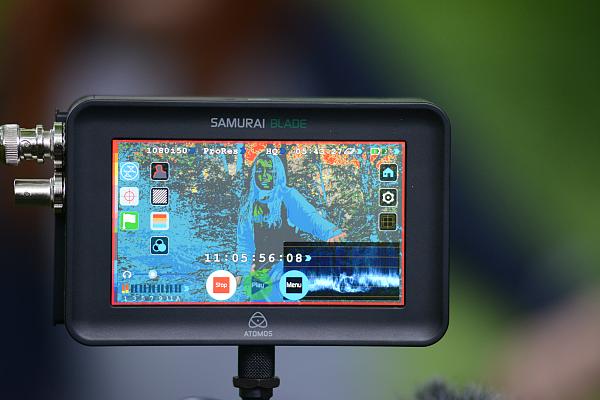 With the Samurai Blade you now have a great recording and playback device with superb visual monitoring and full broadcast scopes.

My view on the Blade is that it is so good as a monitor I would use it for this reason alone – the ProRes recording is something I don’t always have to have – though good monitoring is essential. I love the fact that the unit is light and portable and runs off light-weight Sony batteries or compatible batteries. You can use the Blade on-camera, off-camera, or attached to an arm and position wherever you wish.

Atomos have done something major here. There are other ProRes and DNxHD recorders on the market though Atomos have provided an affordable solution that is amazingly portable, powerful, fun to use, uses affordable media, and uniquely gives the means to view and pre-edit your content. Not only is the screen beautiful to view, it also works a fully responsive touch screen for accessing the controls and functions. There is also a tally light to indicate recording on the side of the unit – nice touch! 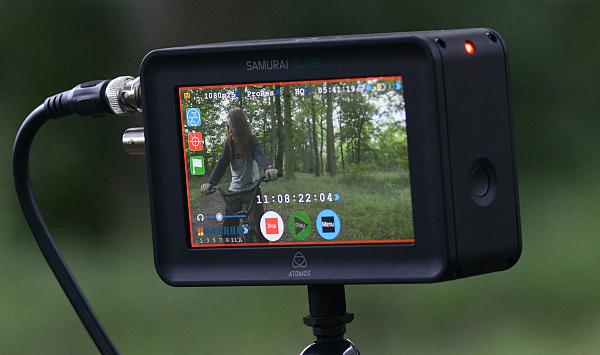 The Samurai Blade by Atomos is priced at $1295 USD. This is now shipping and available in the UK for £850 ex-vat.
Package Includes 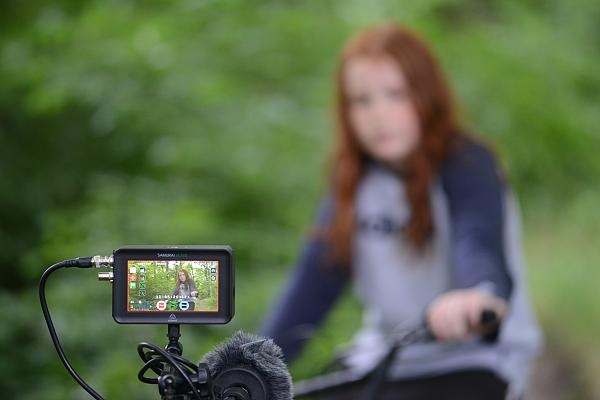 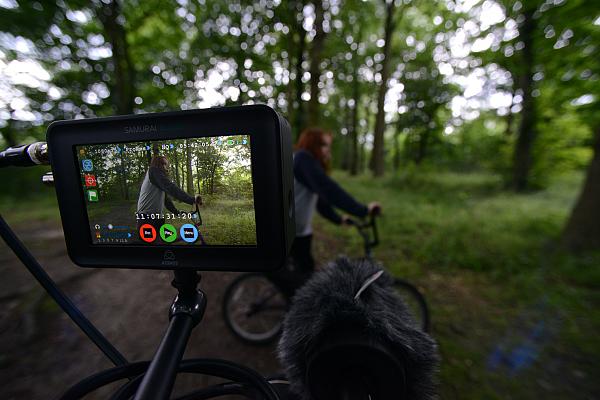