MAINS POWER FOR ATOMOS SAMURAI OR NINJA RECORDERS ON LOCATION 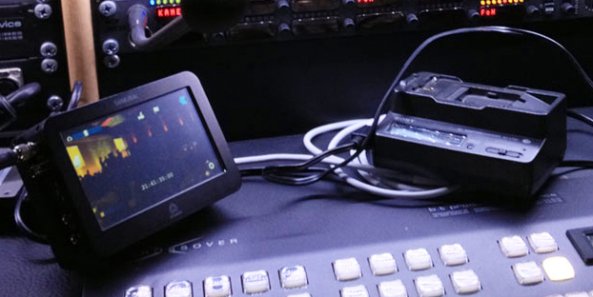 >> 2 videographers tell the story of using the Atomos Samurai on location, with a unique way of powering the device for extended periods of time.

Was working on a job in Switzerland recently. One of the requirements was for an external record, via SDI, from vision mixer. I’d brought the Atomos, Samurai with me for this purpose.

The Samurai (SDI) and the Ninja (HDMI) are powered by Sony NPF, or compatible, batteries. You can get amazing record and playback lengths off two large batteries. However I had always believed there was no way to mains power the Samurai or Ninja. No AC unit is suppled and there is no obvious way to get power into either of the devices.

There is a way. Full credit to Matt Davis, www.mdma.com, as he is the one who enlightened me to this method. Matt’s report follows this one.

Using a Sony AC adapter/charger, and cable with dummy battery, which comes supplied with the unit, one can run external power direct into a Samurai or Ninja. The dummy battery simply fits directly onto either of the Atomos devices. So long as you plug into the the Slot numbered 1 for the battery, then the device will work off AC power.

This is a brilliant solution to powering these ProRes/DNX HD recorders when long records are required and batteries are not the ideal power source.

I’m a big fan of the Atomos Samurai and Ninja recorders. The on-screen display, ability to record to spinning drive or SSD, and the fact that the Samurai will start stop record over SDI is a huge deal (the Ninja will start/stop record over HDMI with the Canon C100.) You can also trim clips on location so only the material you want is brought into Final Cut Pro X. I’ve been working with the Samurai over the last few months, and have been using a Ninja for the last year or more. These are very useful and capable external recorders.

This is a huge bonus to know that these recorders can be externally powered. The result is ready to edit files in very high quality. The ready to edit part is a big deal, as when your editing at midnight you don’t want to stop for an hour and a half to transcode a file. You want to start working straight away, which is what I was able to do.

Sony AC Adapter AC-V700 (with dummy battery cable) is what I used on location. These have been supplied with Sony Z1s in years gone by and most recently with the FS100 and FS700.

The Swit Sony NPF Dual Charger will also do the job – this too can be purchased with dummy battery.

The job we had to do was to record the output from a vision mixed feed from an Outside Broadcast truck, filming an awards ceremony. We had, in fact, each of the 5 cameras recording to AJA KiPros, but there was a need for two copies of the finished programme to go to two separate editors (myself and Rick, as it happens, working on two entirely separate edits) as soon as the event finished – even the time spent copying from the KiPro drive to another disk would have taken too long. So we added Rick’s Samurai to the chain.

We learned a couple of interesting things in preparation for the job.

The first is how to reliably power a Samurai’ – its neat little case doesn’t have a mains adaptor in it, although it will happily run for hours on Sony NP-F style batteries (you can A-B roll the batteries too, so changing one whilst it’s powered off the second battery). However, I didn’t want to have to think about checking batteries – I wanted to switch it to record, then switch it off at the end, as I had other things to worry about.

As mentioned in Rick’s piece which precedes this – the Samurai (and Ninja) can be powered off a Sony Dummy Battery’ supplied with Sony battery chargers and some camcorders. Plug the dummy battery in, connect it to the charger and switch to Camera’ mode and behold – one mains powered Samurai.

The second point is due to the great OB Truck Crew Chief, who set up the audio in a very clever way which gave me a unique opportunity to fix the edit’s music tracks.

Unlike HDMI, HD-SDI has 8 audio tracks embedded in the signal. The sound engineer kindly split his mix into 4 stereo groups: a mixed feed, audio from the presenter microphones, audio from directional microphones pointing at the audience (but away from the PA speakers), and a clean music feed.

The practical upshot was that I was able to edit several versions of the 90 minute awards ceremony (30, 8 and 3 minute versions) without the music, then relay the music (from its clean feed, or replace with licensed alternatives for the DVD version) where appropriate, thus producing a very slick result and saving a lot of time and hair pulling (or sad compromises) in the edit suite.

Technically, the Samurai footage came straight in and ready to edit with its 8 audio tracks. I was able to slice it up and do a pre-mix of the required tracks.

In the past, this has been a bit of a nightmare. This time, it was easy to take audio from the stage and play with the timings for music cues.

So, you have a choice of on-location mixer. Be it HDMI or HD-SDI, your picture is made up of 1s and 0s and so there’s no technical difference in the quality if fed with the same source*. However, the audio is interesting. Most of the time, shooting indie films or simple corporates, you’re not going to need lots of versions. When it comes to live performances, the 8 tracks of HD-SDI can significantly offset the extra cost of the technology. Well worth a conversation with your Techinical Director or supplier to sort out the sub mixes’ (separating your audio feed to the channels) and embedding’ (entwining the audio channels into the HD-SDI feed).

It’s odd that this hasn’t occurred to me before – the facility has been there, but perhaps it’s that last bit of kit – the HD-SDI Audio Embedder’ available from suppliers like Black Magic Design and AJA – that’s been hiding its light under a bushel. As such, it is probably the least sexy item on one’s shopping list. Not the sort of thing that crops up for the journeyman videographer, but just the sort of thing when specifying the larger jobs with rental kit.

So, note to self: when dealing with complex audio, remember HD-SDI Audio Embedders, HD-SDI recorders.