THE BLOG > Product Reviews > The Atomos Ninja Star: Is this the perfect HD ProRes recorder

THE ATOMOS NINJA STAR: IS THIS THE PERFECT HD PRORES RECORDER

9th
MAR 2015
The Atomos Ninja Star: Is this the perfect HD ProRes recorder

While the talk might all be about 4K at the moment, the real work being done is still largely HD. Atomos have a killer product, the Ninja Star, which has been out for some time: this is the world's smallest and lightest ProRes recorder. The strength of the Ninja Star is it provides exceptionally high quality recording in a unit which barely adds to the weight of your camera. Many other units require bolt-on's and scaffolding to make them work. The Ninja Star is barely noticeable in terms of size or weight. 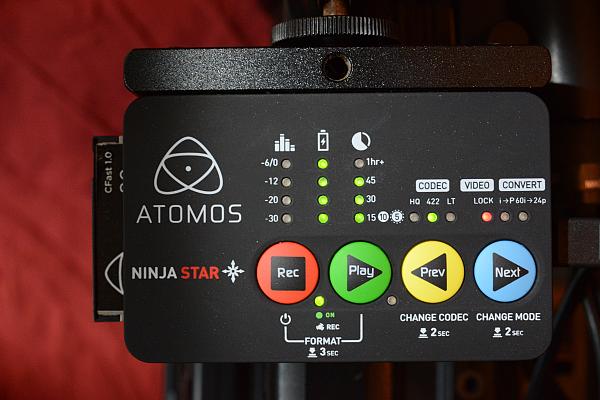 I regard the Ninja Star as one of the unsung heros of the video world. I’ve been testing this in-depth and have found this to be both reliable and useful. In short, this device provides high quality ProRes recording over HDMI and with this comes a streamlined workflow direct from C-FAST media to hard drive for editing. All in a delightfully small package, which, in use, adds very little weight to your camera. 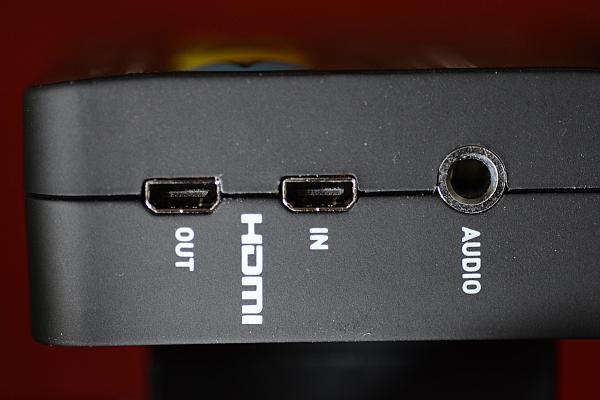 Operation is very simple and logical. You simply set the codec you wish to record to, format your media, and plug HDMI cable into camera and the other end into the Ninja Star – you are ready to record. Simply press the red button on the unit to roll record; a flashing red light below the record button indicated recording is taking.

To change codec hold the Yellow button for 2 seconds and you can cycle between ProRes HQ, 422 and LT.

To set the Ninja Star to record Progressive hold the Next button for 2 seconds, the red light below the word Lock will then become green below the letters i>P.

The last point is important. On default the red light below the word Lock is set – my recorded images suffered from terrible interlacing (the camera was set to 1920 × 1080 25P); I changed to the second setting to i>P and the image quality is pristine.

Rigged up to my Sony PMW-F3 I barely notice the Ninja Star is attached. This matters – because the recorder is convenient and doesn’t weigh you down, makes me inclined to use it!

I own a Ninja Blade and a Samurai Blade. These do get used for chroma key shoots and high-end shoots when the client demands the best. However, rigging a recorder with arms and separate battery system brings it’s own demands. 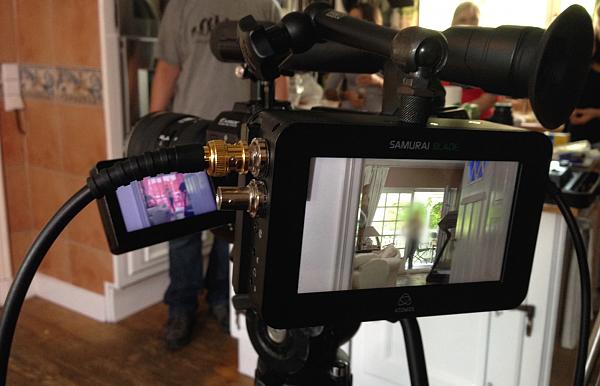 Above: Samurai Blade rigged with Noga Arm for positioning
The Ninja Star uses a small Sony NPF570 size battery. Expect several hours record out of each battery. You can keep track of power on the 4 light gauge on the device. The battery attaches nicely on the back of the unit: in the image below the battery is attached, however, you can’t see it as it is located at the back of the Ninja Star.
The Ninja Star is an excellent recorder for anyone shooting HD wishing to meet and exceed the broadcast standard. 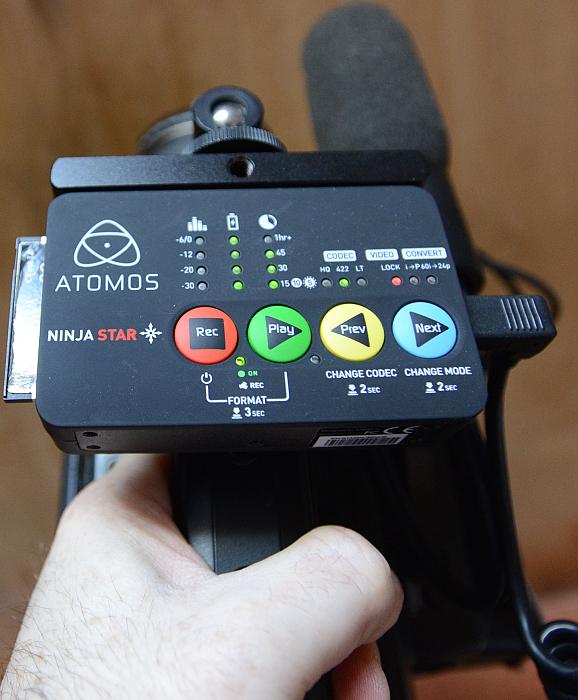 I am quite familiar with the Atomos product line – as mentioned, I already own a Ninja Blade and a Samurai Blade. I do use these frequently – their use is dependent on the situation I am filming. Every time I do a chroma key shoot the Atomos ProRes recorders get used; many-a-time when a camera is suspended above as an overhead camera I will run an SDI cable from camera to the ground and then plug this into a Samurai Blade. I can then view the camera output on-screen and record this remotely on the Samurai Blade. Other times, for vastly improved monitoring, while filming, I will shoot with a Samurai Blade or Ninja Blade, simply because the screen is so good! The Blade recorders also provide a host of other functions not found on the Ninja Star – features such as Waveform monitor/Vectorscope, peaking, false colour, and the ability to Mark favourites while recording; this information is then exported by XML and imported into Final Cut Pro X. Think of the Ninja Star as being a basic, high-quality ProRes recorder, where-as the Samurai Blade and Ninja Blade offer many features beyond the ability to record ProRes.

Above: Waveform monitor on the Samurai Blade 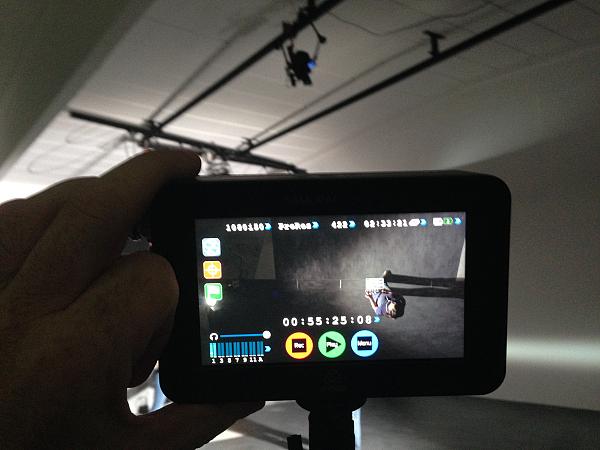 Notice in the above image the camera is suspended up high to record an overhead shot; at the top of the frame you can see an SDI cable which feeds to the Atomos Samurai Blade. I can then monitor and record the image at the press of a button from ground level. 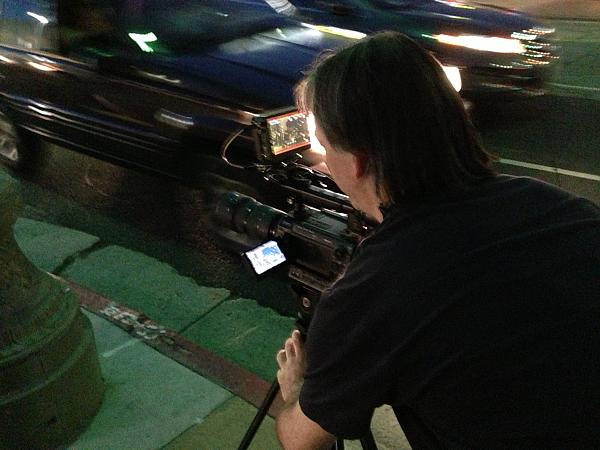 Above: On location recording ProRes, straight out back of the camera over SDI to the Atomos recorder. 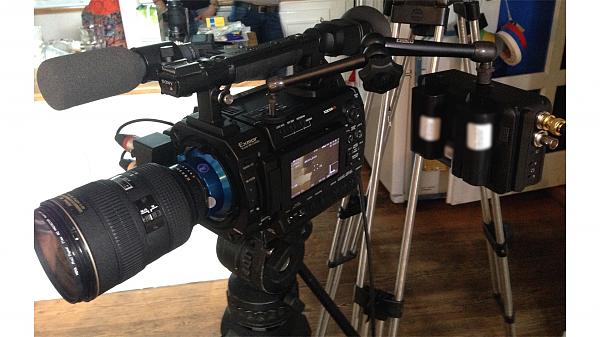 Above: Samurai Blade attached to camera with Noga arm

Above: size comparison of Samurai Blade and Ninja Star. The Blade is almost twice as large and twice as thick. Note: the Ninja Star has cheese plate attached. 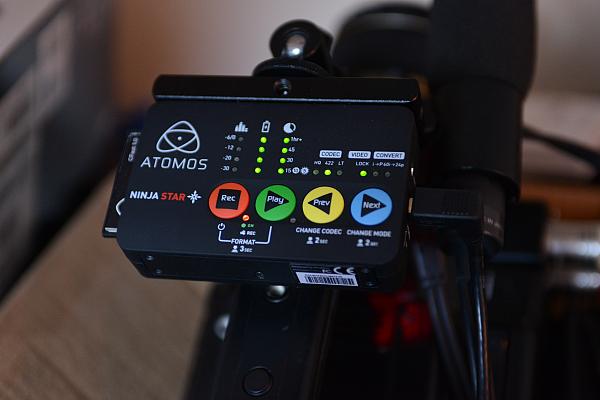 Above: Ninja Star attached to camera
The Ninja Star is great as a stand-alone PreRes recorder – and complements the other recorders in the Atomos range.
As you can see in the images the Ninja Star sits on top of my camera via an attachment on the cold shoe. Effectively, the little ProRes recorder becomes my record button. Simply button on and off and record the 10-bit 4:2:2 ProRes (HQ), ProRes Standard, or ProRes LT to CFast card. That’s a lot better than the 35mbps in-camera on the PMW-F3.

As a safety measure I also simultaneously record XDCAM EX, just in case there is a recording problem (you can’t be too careful.)

Recording to 10-bit 4:2:2 ProRes or ProRes (HQ) gives to the images what I call an invisible shine. It just looks better! Less artifacts in complex motion, richer colour depth, and the unquestionable reliability of dual record – one record to ProRes the other to XDCAM EX in-camera. 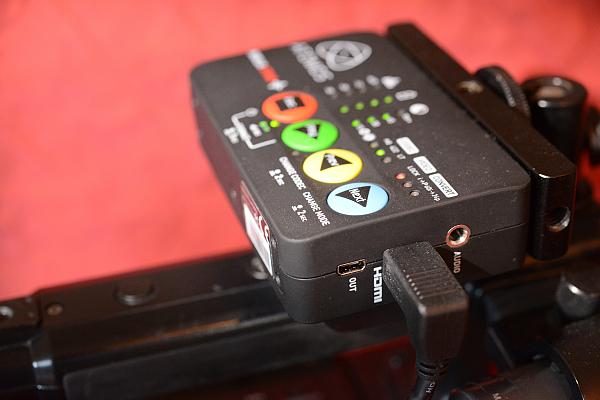 Above: Note the right angled HDMI connector, made by Atomos. This is strong and fits nice and tight.
The Ninja Star isn’t perfect – I’d really like it to be SDI. Hopefully Atomos will bring out a Samurai Star at some point. Furthermore, the recorder does trigger over HDMI from the more modern cameras, however, not the PMW-F3 I am using. This isn’t isn’t to do with the Ninja Star or Atomos – it is to do with the implementation of the HDMI protocol on some of the older Sony cameras. On the newer Canon and Sony cameras (and models from other manufacturers), from all accounts, the Ninja Star will trigger fine – meaning press one button to record on camera and Ninja Star simultaneously. If you have an older camera like me, which doesn’t trigger over HDMI, then manually press record on the device. This is no big deal.
I’m the sort who would worry about a flimsy Micro HDMI connection, however the R-Angled Micro HDMI to full-size HDMI cable made by Atomos fits tightly into place. The fact that it is right-angled and the cable coils means you are unlikely to have any trouble. Having experienced other Micro HDMI cables I would recommend the Atomos cable. This is built for a purpose and will do the job! 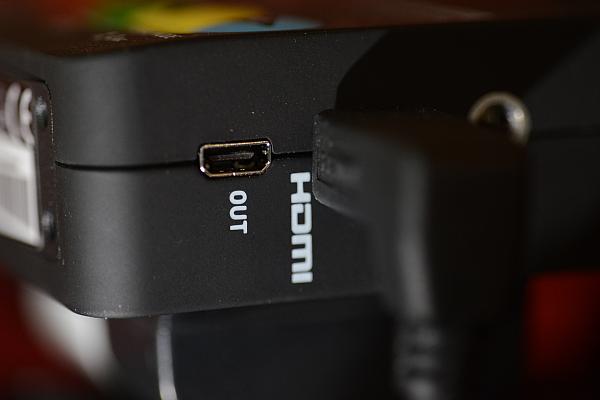 1920 × 1080 HD still has a lot of life left in the production world! This is the accepted method of acquisition and distribution for the major broadcasters, corporate producers, the entire events industry and consumers – I suspect even with 4K moving forward at a startling pace, HD will remain the dominant format for some time yet. That’s what the clients are asking for and paying for in today’s economy, certainly for the work I do.

The bottom line – for those shooting HD and those who wish to extend the life of their current cameras, and streamline their workflow with the ProRes codec for both acquisition and post production, the Ninja Star is a very affordable and effective way to achieve this.

Atomos also sell CFast media to work with the Ninja Star in sizes of 64GB and 128GB. See details below for recording times. 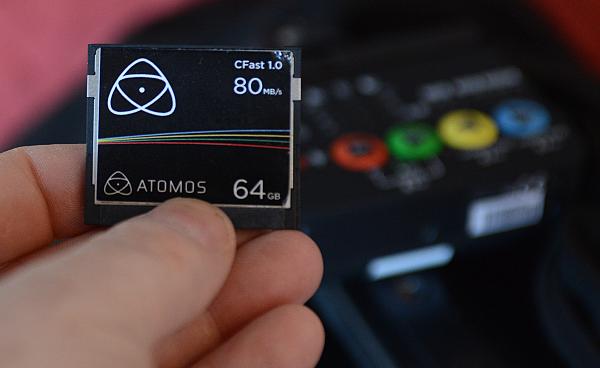