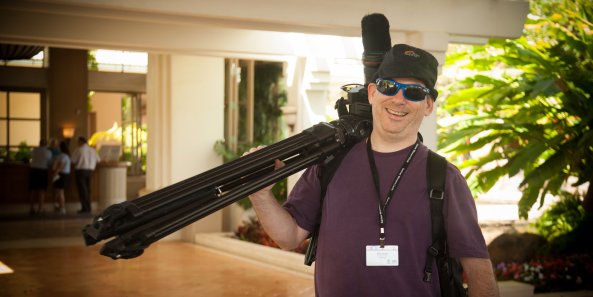 >> Welcome to Movie Machine! The place where the art and technology of movie making is explored at every level, for everyone. Whether you are a seasoned veteran or just jumping into the magical world of moving images, Movie Machine is a place to learn, to share and to develop. The site, as it is now, is just the beginning. This I plan to develop further. Send me feedback anytime! I'm always keen to improve and take this forward.

It gives me great pleasure to announce the launch of my latest project, Movie Machine.

This represents a continuation of the work I began in 2003 with the UKFCUG, which then led to many other projects from books, to magazine production, web work, public speaking and countless jobs which have taken me to all corners of the world.

The video community has been instrumental in my own professional career, and also the development of my skills as a cameraman, editor, producer/director.

I started in the video industry way back in 1989, as a trainee editor at one of three TV stations in Perth, Australia. The industry back then was so different to today. A broadcast camera cost as much or more than a house; an edit suite was even more expensive. It was a case or do whatever you could to get noticed, to get someone to employ you. Without the wave of the hand of an executive you were nowhere!

Now, cameras are affordable and an edit system costs even less. And the quality far outstrips anything I could have produced in the first decade of my career in television.

TV was good to me. Not just good, but amazing in terms of my own development both professionally and personally. I was able to work through many different jobs: starting as an ENG editor in a 2 machine Betacam suite (you couldn’t even do a dissolve!); working in video graphics, vision mixing live programs before finally achieving the title of Live Director. Beyond that I moved into online edit suites, from Ampex Ace, to Sony 2000/9000/9100, and then, of course, non-linear when these these became affordable to those willing to invest around £5000 at the time.

The wave which started with the release of the VX-1000 in late 1995 changed everything. Put that together with a FireWire Mac and editing software (first for me was Radius EditDV soon to be followed by Final Cut Pro) and real magic was at our fingertips.

The next decade saw the introduction of affordable drives, affordable HD, better cameras and amazing software. I cruised that wave with every twist and turn of technology.

The role of the video community cannot be understated for myself, and the development of countless others in getting to grips with the technology, sharing of knowledge, and just having a great time. My best friends have come out of the community, those with a common interest, those who love the technology, care about the work they do, care with a passion about the potential and power which is offered by visual storytelling.

I remember, only too well, struggling to convince executives all through the 1990’s to support my video ideas. To get someone to agree to fund a project has to be one of the most painful, mind-numbing, desperate processes one can put themselves through. To wait weeks and months for someone to “yes” or “no” – it kills the passion, it dumbs the senses, the drive and enthusiasm becomes so beat out of you it becomes easier to do a job and forget ones dreams than to pursue them. Not that I ever gave up – but the frustration, at times, was overwhelming.

We now live in a brave new world where you can forget the executives and forge ahead with your own skills, equipment, enthusiasm and drive, however, intense or laid-back you want to be. You make it happen for yourself; or course we got to live, we got to make money; though no longer do we need to lie down and place our destiny in the hands of some guy with a suit, who may not know the front of a camera from the back, or an edit suite from a washing machine.

Welcome to Movie Machine! The place where the art and technology of movie making is explored at every level, for everyone. Whether you are a seasoned veteran or just jumping into the magical world of moving images, Movie Machine is a place to learn, to share and to develop. The site, as it is now, is just the beginning. This I plan to develop further. Send me feedback anytime! I’m always keen to improve and take this forward.

Just before I sign off, a huge thanks to everyone who has supported me over the years. You have all made a huge impact on my life, and the support I have received over the last 6 months since I left the last project has been tremendously encouraging.

Until the next time,