THE BLOG > Tutorials & Advice > Tips for filming from a helicopter

TIPS FOR FILMING FROM A HELICOPTER 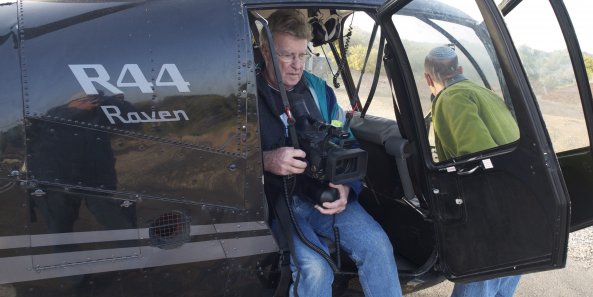 27th
NOV 2012
Tips for filming from a helicopter

>> One of the most difficult places to film is from a helicopter. There are many reasons for this, but it mostly has to do with the nature of how a helicopter obtains lift and direction. Without getting into the theory of aerodynamics, let's just say that the ride inside a helicopter is far different from that of a fixed wing aircraft. I think the word "vibrate" is the best way to describe riding in a helicopter.

With this in mind, add a few other words like “unstable, bumpy and squirrely” and, well, you get the picture. Now you might be asking, if all of this is true, then how do cinematographers get those incredible images shot from a helicopter? The answer? They use gyros and stabilizers. But what if you can’t afford to rent or own this kind of equipment? Are you just out of luck? The short answer is no. There are several things you can do.

Here are my tips for filming from a helicopter:

My first experiences with helicopters didn’t have anything to do with filming. In the 1970s, I worked for a company that was searching for uranium in Wyoming and Montana and I ran the scintillation equipment. Other than videotaping from a police helicopter in Phoenix 15 years ago, my real “baptism” came last year while filming a documentary in Israel. At first, we were just going to purchase any helicopter footage we would need from a film house. After checking the prices, we decided to film it ourselves. Prior to departing, I purchased a Kenyon KS 8 Gyro and also designed a bungee cord configuration to help stabilize my Panasonic HVX camera in the helicopter. We chose the Robinson R-44 helicopter to rent and, at the beginning of shooting, I had my legs on the outside of the helicopter. Not a good idea! When traveling at over 100 miles per hour, the wind wants to pull you out of the helicopter. Remember what happened to your arms when you would put them outside the car window as a kid? I quickly brought them back inside and just turned my body sideways to film. In the photo below, you see the doors on the helicopter are still on. These were all taken off prior to takeoff.

We filmed places like the Sea of Galilee, Nazareth, Capernaum, Bethsaida, Caesaria and Scythopolis from fairly low altitudes. How did the footage turn out and what were some of the lessons learned? For the most part, the footage was really good. The gyro was amazing as it controls your X & Y axis (up and down and left and right) but it doesn’t do anything for roll. I shot slow motion (60 fps) on about 1/3 of the footage and realized that I should have shot all of the footage that way.There are several reasons for doing this. When filming at 60 fps, you’re gathering almost 2-1/2 times the information as when filming at say 24 fps. This makes the footage clearer and more stable. Another thing that is very important when filming from a helicopter is depth of field and focus. I always set my lens to the widest focal length and set focus to the closest distance that you’re going to be filming. What I mean by this is just don’t set your lens to infinity. Ask your pilot what the closest distance they expect to be from what you’re shooting, and set your focus to that and then pull all the way back on your lens. This way, everything will be in crystal clear focus when shooting wide. You also need to tell the helicopter pilot not only where you want them to take you, but how you want them to fly the helicopter. By this I mean how slow or fast, what direction, tight circle, etc It’s also a very good idea to keep the shadow of the helicopter out of your shots. The video below are a few examples of the results of the first trip in April/May of 2011 in Israel.

Now for a caveat. In June of this year, we went back to both Jordan and Israel to finish up our shooting, including another day filming from a helicopter. We were lucky enough to have the same pilot and the same Robinson R-44 helicopter. This time, the weather wasn’t as good, plus it was very hot and humid. Instead of shooting from the back seat, I shot from the front seat, next to the pilot. Prior to getting on board, I turned on my Kenyon KS 8 Gyro (it takes a lot of power to get it up to speed, so in order to save the battery, I used the car cigarette lighter socket to start it up) and once I was seated in the front, they handed me the gyro and I thought they had put the power unit in the back. We took off and it took us around 45 minutes to get to the first location. After shooting for over an hour, we had all the footage I needed. As we were heading back, I noticed that the gyro was cool. It should have been hot to the touch. I turned around and asked my partner to plug in the cord to a backup battery. He said, “Eric, it’s under your feet.” I looked down and my heart dropped. The light on the power unit was off and the battery was showing full. When they handed me the gyro, they must have accidentally shut off the power switch. This meant by the time we got to location, the gyro wasn’t working. In other words, I shot all of the footage without my gyro! I immediately turned it back on and filmed some of the scenery on the way back to Tel Aviv figuring that at least I’d have some beautiful country on film if nothing else. The first thing I did when I got back to Jerusalem was download the footage. Guess what? It was beautiful. How and Why? Three things. First, I had designed a harness to hold the gyro and my camera with bungee cords. Second, the gyro, even though it wasn’t working, added enough weight to make the set up more stable.

Third, I have a great stabilizer as part of my editing system which is Final Cut Pro X. The bottom line  if I hadn’t designed and used the bungee cord configuation, it could have been a total disaster.Oh, and I forgot to mention the cost of renting the helicopter. It was $1,200 an hour with the clock running from the time we got on the helicopter until shutdown. Our bill each time was around $4,000. In conclusion, if you’re planning on shooting from a helicopter, you have to carefully plan just how you’re going to film. Years ago, when filming from a police helicopter with a 20 pound camera, I used a pillow on my lap to help keep the camera stable, a procedure I don’t recommend. Instead, if you can’t either afford to rent or purchase a stabilizing unit, try my bungee cord configuration.