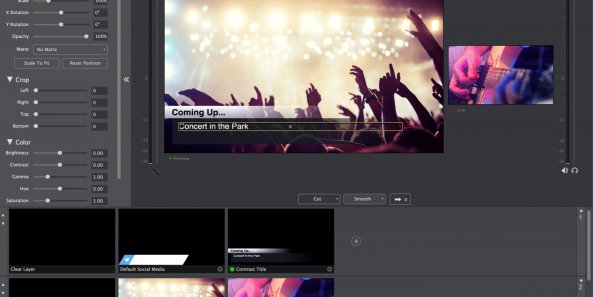 >> Telestream has announced Version 7 of Wirecast, the leading live streaming and production software. Wirecast 7, which will be available later this month.

Wirecast 7 adds new powerful production capabilities, GPU-accelerated encoding, and a streamlined user interface that allows users to effortlessly create and stream high-quality live broadcasts from their computers to dozens of popular destinations such as Facebook Live and YouTube, as well as to custom streaming servers, with just a few clicks.

The new User Interface in Wirecast 7 enables quicker and more flexible access to shot editing features and enhances on-the-fly editing. With the Shot Editor panel, users have more control over every aspect of a broadcast, including the time-saving in-shot source toggles that enable users to turn video and audio layers on and off within each shot for dynamic editing of complex composite shots. Wirecast 7.0 adds more options for how text can be displayed on screen. Text can be entered live, via a file or from an RSS feed enabling a different user to prepare text that will be automatically picked up in the broadcast. A new audio mixer controls every source from one central location, and an enhanced mix minus feature selectively mutes any source, such as the users own voice, while otherwise monitoring the full stream audio output. A Global Hotkey Management system speeds up any repetitive task by allowing users to create their own hotkeys.

“Much more than a facelift and some great new features, Wirecast 7 also takes advantage of a new performance architecture that improves CPU utilization across the board, accelerates stream encoding by making use of GPU hardware, while also letting users closely monitor the health of their streams with a new graphical diagnostics view,” said Tom Prehn, Senior Product Manager at Telestream. “With the release of Version 7, our goal is to empower users to do more live than ever before, to allow them to set a new bar in creating/directing a live streamed event, and we feel weve done precisely that.”

For use cases where Microsoft PowerPoint, Apple Keynote or Skype windows need to be shared, the new Screen Capture feature allows any window or application to be easily added to the broadcast area as a source.

Wirecast 7 will be will be available at the end of June on the Telestream store and through Telestream’s network of resellers.

Wirecast Studio is priced at $495 and Wirecast Pro, priced at $995, adds support for more advanced production features and additional input sources. Upgrades from previous versions of Wirecast will start at $179.

Customers who buy Wirecast between now and the release of Version 7 will receive the upgrade to Wirecast 7 free.