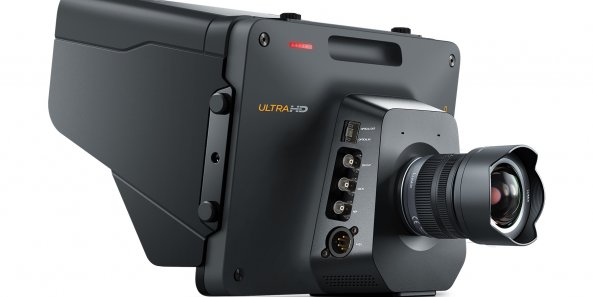 Based on user feedback, most customers doing live production use AC plug in power, so they have asked for a model without the battery. In addition to making the cameras more expensive, the large internal battery also made it difficult for customers to ship their cameras via air freight when they needed to take it on location for a shoot. With the battery now being removed from the camera, customers can ship them anywhere. The removal of the battery allows the cameras to be sold at these new lower prices.

With its new low price of only $1,695, the new Blackmagic Studio Camera 4K is now same price as the previous HD only model, making it easier than ever for customers to switch to Ultra HD. Both models of the Blackmagic Studio Camera give customers incredible HD or Ultra HD image quality along with talkback, tally, remote camera control, lens control, built in DaVinci Resolve primary color correction and much more.

As with the previous models, these new Blackmagic Studio Cameras can be controlled remotely from any ATEM switcher. The all new ATEM Television Studio HD features a built in talkback converter, making it the perfect companion for the new Blackmagic Studio Cameras because customers can use them without needing a separate, expensive talkback controller.