Sonnet today announced the Echo Express SE I, the latest addition to the award-winning Echo Express line of Thunderbolt 2-to-PCIe® expansion systems. Like the other members of the Echo Express family, the SE I enables the use of a wide variety of high-performance PCI Express® (PCIe) cards originally designed for use in desktop computers with any Mac® or Windows® computer with a Thunderbolt port. The new single-slot model supports nearly every Thunderbolt-compatible PCIe card on the market, including double-width cards (PCIe card plus daughter card).

The Echo Express SE I features Thunderbolt 2 technology, which provides ample bandwidth for many of the most demanding, highest performance PCIe cards, and incorporates support for the DisplayPort 1.2 protocol, which enables video streaming to a 4K video monitor. The new expansion chassis is ideally suited for use with a wide variety of pro video capture, audio interface, SAS or SATA HBA, 16Gb or 8Gb Fibre Channel, 10 Gigabit Ethernet, and RAID controller PCIe cards, allowing them to connect with Thunderbolt-enabled iMac®, Mac mini, MacBook Air®, and MacBook Pro® computers, as well as Mac Pro® computers that lack PCIe expansion slots. Plus, the Echo Express SE I’s dual Thunderbolt 2 ports not only support full-bandwidth connectivity with 20Gbps Thunderbolt 2-equipped host computers, but provide full backward compatibility with 10Gbps Thunderbolt-equipped computers and devices, and support daisy-chaining of other Thunderbolt 2 and Thunderbolt devices.

The Echo Express SE I was designed for users needing a simple way to connect a single adapter card to their computers, and it supports all but the longest (full-length) Thunderbolt-compatible PCIe cards. Weighing just 2.6 pounds and measuring only 5.6 inches wide by 8.6 inches deep by 3.5 inches tall, the SE I is compact and lightweight, yet its rugged aluminum case provides great protection for the installed card. The new chassis supports half-length (up to 7.75 inches long), full-height, single-width PCIe 2.0 ×8 cards, and provides an additional space for a daughter card. Some specialty cards, such as RME’s HDSPe MADI FX card, Blackmagic Design’s DeckLink 4K Extreme, and the Lynx AES16e-50, include a daughter card that mates with and provides additional external connections to the main card. In the SE I, the daughter card occupies an adjacent space without filling a slot. The list of compatible PCIe cards is available on Sonnet’s Website and is continually expanding as more cards are tested and certified.

The Echo Express SE I features an ultraquiet, temperature-controlled fan that automatically speeds up as necessary to cool the installed card when it’s hot, slows down when it’s cool, and quietly and efficiently cools the card at all times, even during peak operation.

The Echo Express SE I ships with an 80-watt external power adapter, keeping the system’s energy usage low. The SE I also conserves energy by automatically powering off when the computer powers off or sleeps. In the package, Sonnet includes a Thunderbolt cable to connect the SE I to a user’s computer and a lock mechanism to secure the cable to the chassis. Sonnet’s new ThunderLok Thunderbolt Connector Retainer Clip screws into the Echo chassis to prevent accidental cable disconnects. Like the other models in the Echo Express family, the Echo Express SE I is designed and built by Sonnet in California.

“With its compact design, whisper-quiet operation, and ultrafast 20Gbps Thunderbolt 2 interface, the Echo Express SE I offers users a small, unobtrusive, and powerful way to add Thunderbolt 2-to-PCIe card expansion to any computer with a Thunderbolt port,” said Robert Farnsworth, CEO of Sonnet Technologies. “For our customers only needing to connect a single card, the SE I offers the broad PCIe card compatibility of our larger Echo Express models, but within a smaller case and at a lower price point.”

Along with the release of the Echo Express SE I, Sonnet has refreshed its smaller sibling, the Echo Express SEL. The SEL shares the same overall features and design as the Echo Express SE I, but is even smaller and purpose-built to accommodate a single low-profile card, perfect for the most popular high-bandwidth network adapter, host bus adapters, and storage interface cards. Along with its new black finish, the SEL now includes the ThunderLok Thunderbolt connector retainer clip and has been reduced in price.

The Echo Express SE I (part number ECHO-EXP-SE1) is available now for $349. More information on the product and compatible PCIe expansion cards is available at www.sonnettech.com/product/echoexpressse1.html

The updated Echo Express SEL (part number ECHO-EXP-SEL) is available now for $329. More information on the product and compatible PCIe expansion cards is available at www.sonnettech.com/product/echoexpresssel.html. 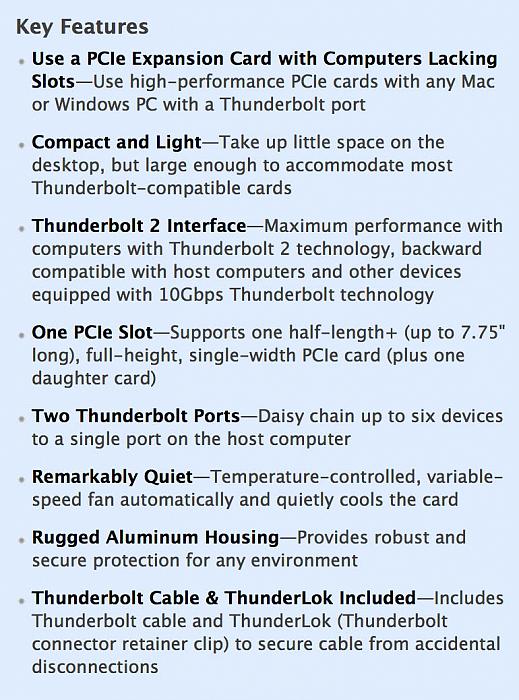