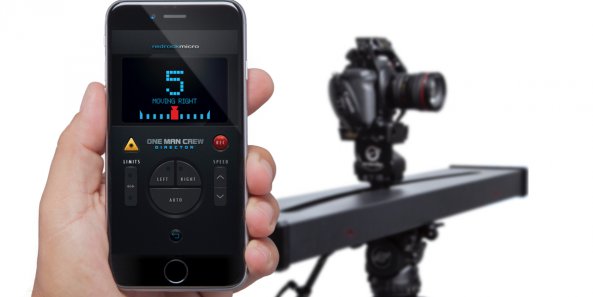 Redrock Micro has announced the release of the new iOS remote app for One Man Crew Director. The mobile app enables wireless setup and control of the One Man Crew motorized parabolic slider, and adds features for streamlining small crew workflow and enhancing on-set intimacy for interviews. The app is available for immediate download from the Apple App store.

The remote app for iOS works on iPhone or iPad, and connects wirelessly to the One Man Crew Director. Once connected, all of the functions of the One Man Crews side panel are available on the app. Building on the remote functions, the App adds new Gesture Screen so camera movement can sync with the interviews tempo and emotion without looking away from your subject.

Benefits of the iOS One Man Crew Remote App.

“The OMC Remote App is fantastic,” said Matthew Allard of Newsshooter.com. “It is intuitive and very straightforward to use. This makes operating the One Man Crew Director so much easier. The ability to control your device while standing next to another camera saves you a lot of time and gives you the added versatility of being able to change the speed or modify your parabolic moves…”

The OMC Director iOS Remote app is available free and can be downloaded from the Apple Appstore at: itunes.apple.com/us/app/omc-director/id1006860441