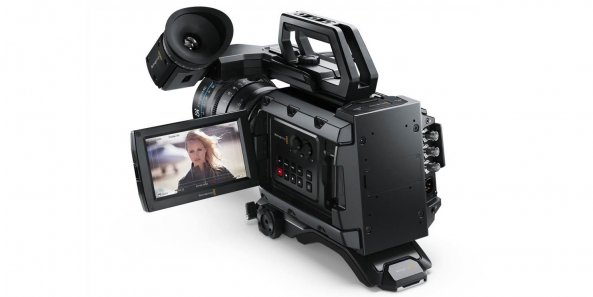 Blackmagic Design has announced a new high performance 4.6K sensor for its URSA high end digital film cameras. The new Super 35 image sensor features high resolution of 4608 × 2592 at 120 frames per second and an extremely wide 15 stops of dynamic range for images that rival those shot on traditional 35mm film.

Existing Blackmagic URSA customers can upgrade to the new 4.6K sensor for $1,995 for the EF lens mount and $2,495 for the PL lens mount. This turret upgrade will be available for customers to purchase and they can replace the turret on their URSA cameras to upgrade to this new higher performance image sensor.

The revolutionary new 4.6K image sensor captures 4608 × 2592 pixels and has an incredibly wide 15 stops of dynamic range to deliver images with higher resolution and more latitude than many traditional motion picture film stocks. The dynamic range sometimes even goes beyond what the human eye can see. That means customers can now use URSA to get the most epic cinematic shots with more detail in the shadows and highlights than ever before. Files are recorded as 12-bit lossless Cinema DNG RAW to preserve the maximum amount of image data and quality for color correction and creative grading in applications like DaVinci Resolve. Broadcast quality files can also be saved in Apple ProRes for easy post production workflows with minimum storage requirements.

“When we introduced URSA in 2014, our goal was to build a camera that had everything customers needed built right into the camera itself, but also future proofed their investment by giving them the ability to upgrade to higher resolution and higher frame rate sensors in the future,” said Grant Petty, CEO, Blackmagic Design. “Were excited to deliver on the promise of URSAs revolutionary design and cant wait to see what customers shoot with this incredible new sensor. Its like getting a whole new Super 35 digital film camera just by upgrading the sensor!”

Blackmagic URSA is a high end digital film camera designed to revolutionize workflow on set for feature films, commercials, episodic television, documentaries and more. Built to handle the ergonomics of large film crews as well as single person use, URSA has multiple accessories built in, including a massive 10 inch fold out on set monitor, large user upgradable Super 35 image sensor and internal dual RAW and ProRes recorders. Because the sensor and lens mount assembly can be changed, customers can upgrade the camera in the future as new sensors become available.

Up to a wide 15 stops of dynamic range allows capture of increased details for feature film look.