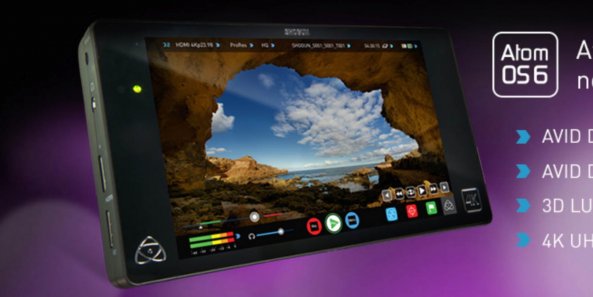 In the space of only 3 months, the Atomos Shogun has quickly cemented itself as the indispensable tool for filmmakers. It is the only product on the market that combines a 4K ProRes 10-bit recorder, 1920 × 1200 high pixel density monitor, professional balanced XLR audio and seamless conversion between HDMI & HD-SDI workflows all housed within a lightweight, durable polycarbonate/ABS body. With AtomOS6.2 firmware released today, the impressive feature list continues to expand, with functionality improvements to enhance the recording, playback & monitoring capability.

“These FREE new features add thousands of dollars of value to the Shogun continuing our tradition of continuously evolving our hardware platform” said Jeromy Young CEO and co-founder of Atomos. “Shogun can now confidently stake its claim as the best 7-inch monitor on the market with the additional bonus of having the only native recording solution for Apple, Avid and Adobe workflows”.


These 5 flagship improvements can all be downloaded and updated for free for new and existing Shogun users by going direct to the support section of the Atomos website www.atomos.com/support